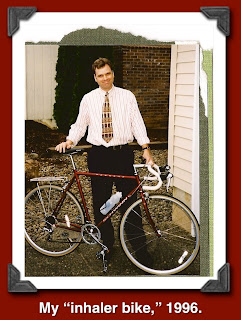 Probably the most important thing anybody with asthma should do.  Have a Plan.

7/19/10
Breathing
Asthma doesn't have to sideline you completely...work the plan!  If you have asthma, learn to respect it, but don't fear it or ignore it.


May 18, 2010
Yea, Though I Ride In The Valley Of Hay Fever
Don’t worry, they’re only pictures of scotch broom, not the real thing.

3-Part Story: Tour De Lopez
Recounting an asthma attack on an island just in time for the 2009 Tour De Lopez.  Riding with Steve-O always involves a story.
Part 1: The Story Begins Here
Part 2: The Day Of The Ride
Part 3: After The Ride

December 31, 2009
I Did It For The Money. And The Road Bike.
The stupid stuff I'll apparently do for a bike.

Kelly Carlisle
Salem, Oregon, United States
Some of the greatest cycling anywhere can be found in here in the Pacific Northwest. The coffee's pretty good, too! Enjoy.